In March, SIA pax load factor at 73.2% was below its 19-year average for the first time. Photo: Leong Chan Teik

CLSA has maintained its ‘underperform’ rating on SIA shares after the airline’s passenger traffic slid further in March with -3.6% because of seasonality, Japan’s disasters and a focus on higher yielding passenger.


CIMB has ‘buy’ and 14.5 cent target for JADASON ENTERPRISES 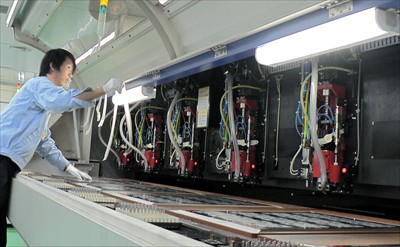 What? - Longer lead times for laser drill. DigiTimes reported that the already-tight supply of laser drills may worsen in the near future due to interruptions in key component supplies caused by the recent disaster in Japan.  This will benefit PCB laser drilling service provider, Jadason Enterprises.

So? - Good business in distribution. It was also mentioned that PCB suppliers like Compeq, Unimicron and Unitech have reportedly stepped up their purchases of new equipment used to expand capacity for HDI boards in view of rising smartphone and tablet PC demand. We believe that the tighter supply of laser drills would likely raise business volumes for Jadason's equipment distribution arm. The tight supply could mean stable margin for this business.

Then? BUY Jadason. TP of S$0.145 suggest a further upside of 53% from its mid-day closing price. Stock remains cheap at only 4.0x CY11 P/E and 0.6x CY11 P/BV. Earnings quality continues to improve in FY10 with its service business benefiting from strong demand for smartphones and tablet products.

The company declared a 0.5ct final dividend in FY10, coupled with an interim dividend of 0.2ct, full-year dividend was 0.7ct (7.4% yield). Given its strong free cash flow in FY10, we will not be surprised if it pays higher dividends again in 2011. Also, management does not rule out the resumption of share buyback.

While the company is currently trading at a cheap valuation of 3.9x trailing FY10 earnings, we expect that there are some headwinds to the share performance due to the dilution from the issue of TDRs and higher raw material costs which will erode the gross margins.

We maintain our BUY recommendation with a target price of S$0.54, based on a sector average PE of 6.6x 2011F core earnings.

We have 413 guests and no members online