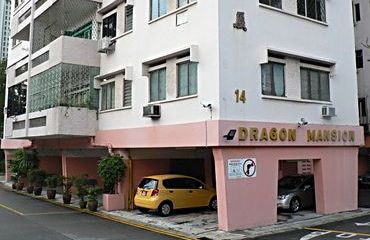 Dragon Mansion will be redeveloped by Roxy-Pacific. The launch of sale of the project is expected to be in 1Q next year. NextInsight photo
Roxy-Pacific is a beneficiary of the pick-up in high-end sales. The group has acquired the Dragon Mansion site at Spottiswoode Park Road last year for S$100.8m or land cost of S$850 psf.

The freehold site is in the Tanjong Pagar area and within walking distance to the Outram MRT station and other amenities.

It has a total land area of 3890.2 sqm and a maximum plot ratio of 2.8 for apartment development. This site is also in proximity to the Tanjong Pagar Malaysian Railway Station area that could be eventually redeveloped, and is just a stone throw away from the recently launched Spottiswoode Residences, which is selling at ASP of about S$1800-S$2000 psf.

Target price for Roxy-Pacific raised to S$0.55. Assuming ASP of S$2000 psf, we reckon Roxy-Pacific could book in an estimated S$85m pre-tax profit when fully sold, to be recognised over three years. This project is expected to be launched in 1Q11.

After incorporating a high ASP for the Spottiswoode project, adding two more upcoming launches and tweaking ASPs for recently launched projects, our RNAV is revised up 16Scts to S$0.79. Applying a 30% discount to RNAV (in line with the residential developers in our DBSV coverage of 10% to 40% discount), our target price for Roxy is S$0.55 (Prev S$0.44), which provides a potential upside of 47%.

Kevin Scully notes INNOTEK has a dividend yield of 9.3% 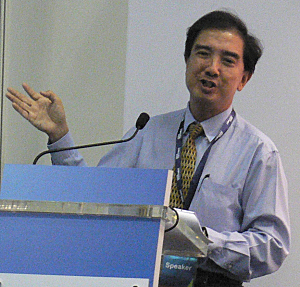 Kevin Scully, executive chairman of NRA Capital. NextInsight photo
Innotek is in both my Stock Picks as well as my Yield portfolio.   It recently reported its Q3-2010 results which saw revenue rise by 22.6% to S$112.8mn while net attributable profit rose 374% to S$4.52mn.  Key highlights of the results are:

In its commentary, the company attributed the good performance to strong demand for its automotive, office automation and consumer electronics (mainly TV components).  For Q4-2010, the company is guiding for a stable outlook for its automotive and office automation but weaker TV demand.  Q4-2010 net profit is also forecasted to be lower than Q2 and Q3 which was S$5.7mn and 4.5mn.  A figure of between S$3-4mn is likely which would give full year net profit of about S$18mn.

Innotek remains in my growth and yield portfolio.  With an expected minimum dividend of 5 cents per share - we have a running dividend yield of 9.3%.  The prospective PER for 2010 at 6.6 times is reasonable with investors also enjoying protection from its NAV - the shares are now trading on a price to book of 0.62.   At S$0.53, investors also enjoy net cash backing per share of S$0.27.

We have 519 guests and no members online