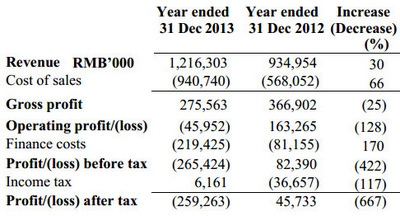 China New Town Development Company Ltd (HK: 1278; SGX: D4N) reported a disappointing year for its business in 2013 but is upbeat on the impending entry of China Development Bank as its strategic shareholder.

The property play saw its full-year revenue rise 30% to 1.22 billion yuan, but it swung to a net loss of 212 million versus a net profit of 14.44 million a year earlier.

“Our results are primarily driven by the frequency and achieved selling prices at public auctions for land use rights.

“Therefore, they are likely to be affected by all kinds of variables, and are not completely within the control of the Group,” said China New Town Development Chairman Mr. Shi Jian.

Unlike previous years, China New Town finalized only one land sale, in the month of March -- a 110,022 sq m plot in Luodian, Shanghai.

More importantly, the local government decided to decrease the percentage that Shanghai Luodian Project was entitled to on the land sale proceeds back to 48% in the year 2013, from 57% in 2012. 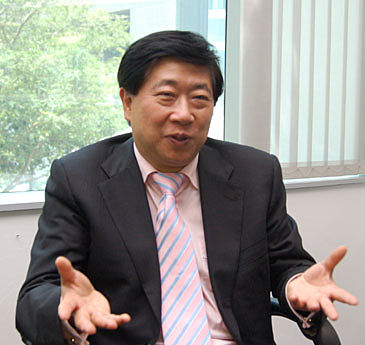 Shi Jian is the executive chairman of China New Town Development. NextInsight file photo.As for the Shanghai Luodian plot itself, the project was successfully auctioned and sold by the Shanghai Municipal Bureau of Planning and Land Resources.

After 78 rounds of bidding, the plot was sold for 1.35 billion yuan with a premium over reserve price at over 40% to Zhenro Group, which is principally engaged in large scale developments in new towns and high-end developments in prime municipal districts in Fujian Province.

This compares with net finance costs of just 81 million yuan for all of 2012.

“The increase is primarily attributable to a decrease of capitalized interest in relation to some of our property development projects: Lake Malaren Silicon Valley and Lake Malaren UHO, both of which had entered into completion phase and were being delivered to customers,” Mr. Shi said.

We have 1982 guests and no members online