IGG (I Got Games): Loss-making, stock skyrockets - but it's no Blumont! Temasek owns stake 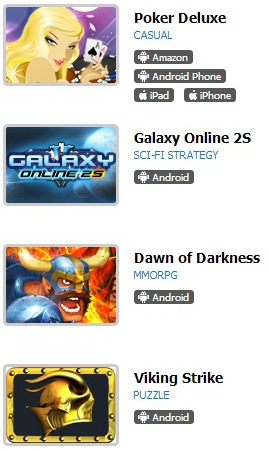 Founded in June 2006 by Cai Zongjian, 36, and Chi Yuan, 57, (whose registered addresses are in Fujian), IGG is principally engaged in the development, publication, and distribution of online games.

Its Singapore connection goes beyond the fact that its HQ is in Singapore.

One of the pre-IPO investors is Vertex, which is ultimately owned by Temasek Holdings, the sovereign fund of Singapore.

IGG listed on the Growth Enterprise Market in Hong Kong on 18 Oct 2013 at HK$2.80 and, after trading in a narrow range for two months, just took off like a rocket.

It's not as though its earnings have been sizzling.

But -- and it's a big but -- in 3Q, it achieved US$4.5 million in net profit. Could the market be reading this as the start on the road to riches for IGG?

Certainly, its topline has shown fantastic growth year after year. Its 3Q2013 revenue jumped to approximately US$22.53 million from US$10.17 million a year earlier.

Bloomberg data (chart below) suggests that full-year 2013 was a profitable year (pending the release of 4Q results by the company), translating into a PE of 63.7X. 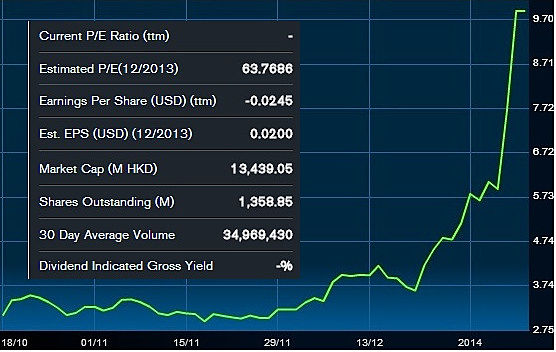 Above: Stock chart of IGG since its IPO on Oct 18. It started to skyrocket just before Xmas. Chart by aastocks.com, data (inset) by Bloomberg.

The reply dated 9 Jan by the chairman Mr Cai Zongjian distanced itself from what the IGG chief operating officer, Mr. Xu Yuan, said in a media interview.

Mr Xu reportedly said that IGG proposed to conduct certain acquisitions in North America and the PRC and that the Group’s market value is expected to increase materially as a result of these acquisitions in the coming three years.

In addition, he reportedly said that IGG would cooperate with Alibaba in the near future.

We have 1235 guests and no members online